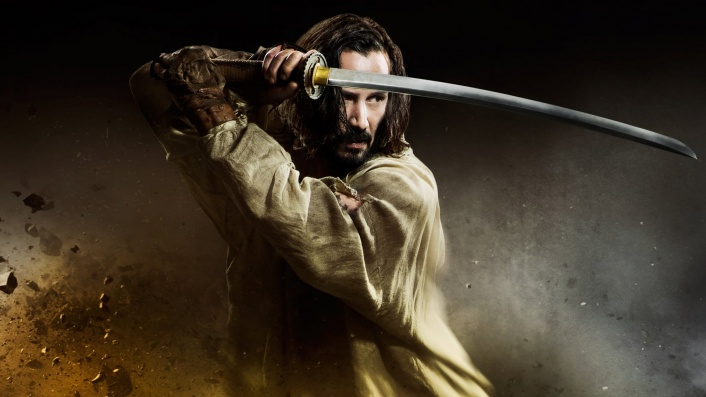 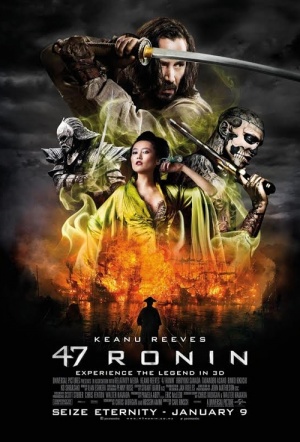 Fact meets fiction in this stylised blend of fantasy, adventure and action set in 18th Century Japan, based on the real band of Samurai who avenge the murder of their master. Stars Keanu Reeves and Hiroyuki Sanada.

A troupe of banished samurai seek to restore their honour against the treacherous Lord Kira (Tadanobu Asano) who was responsible for the death of their master. Kai (Reeves) is the half-Japanese, uneasy compatriot in their company. His standing is questioned when he falls in love with Mika (Kou Shibasaki), daughter of the fallen master.

There’s a scene about halfway into 47 Ronin that sees a nicely CG’d demon monk and Keanu “half-breed” Reeves circling menacingly around a sword in the ground, beckoning to be picked up. As the two make their simplistic moral standpoints, the sword is still in the ground. When they reiterate the plot and Keanu’s background for the fourth time, the sword is still in the ground. Then they stop and stare at each other – sword still in ground – before finally going at it, only to have it all end in an unsatisfying instant. Right there you have 47 Ronin in a nutshell.

As impressive as these visual elements prove to be, the film struggles to grab and maintain audiences’ interest, whether or not they know the underlying legend by heart.

“I will search for you through 1,000 worlds and 10,000 lifetimes!” Reeves promises his beloved. Anyone who sits all the way through this glossy folly will know exactly how that feels.

The basics of the story remain unchanged, but it’s the wanna-be-blockbuster additions that rankle, be it the incoherent direction of first-time feature director Carl Rinsch or the copious CGI beasties who look like rejected "Lord of the Rings" villains.

Can't entirely paper over the void at its center, traceable partly to the shadowboxing of computer-aided filmmaking or studio tinkering.

Hollywood's latest play for the growing Asian market revisits the ancient Japanese legend of self-sacrifice, hoping to offset its garbled narrative and grinding humourlessness with 3D and Keanu Reeves as a samurai Jesus.

47 Ronin is elephantine and lumbering, a wobbly, would-be epic that aspires to the scope and majesty of The Lord Of The Rings trilogy, but comes up woefully short.

The eagerness of the major studios to cozy up to Asian markets yields awkward results.

Perhaps a folly and – Kikuchi aside - too deadpan to be a romp, this is still a decent, colourful samurai spectacle with a classical look (lots of symmetrical compositions) and a story which stands up under multiple retellings.