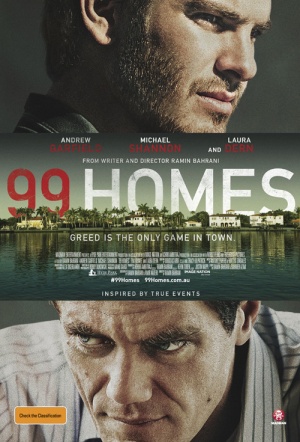 Andrew Garfield and Michael Shannon lead this charged, Venice Film Festival-winning drama. After being evicted from their home, a family's father - desperate for cash - becomes the reluctant employee of the ruthless real estate broker who kicked them out. Co-stars Laura Dern.

Dennis Nash (Garfield) is caught from both sides by a property slump - a construction worker by trade, he can't find work, plus the bank has foreclosed on his family home, and they're turfed out. Suddenly on the streets with no assets or income, a chance meeting sees Nash literally shoveling crap for ruthless real estate operator Rick Carver (Shannon). Seeing something in Nash, Carver puts him to work, introducing him to the shady games played in the aftermath of a burst property bubble. There's money to be made, but there are also lives to be destroyed...

Ramin Bahrani’s gripping 99 Homes is driven by powerhouse performances by two very different actors in the form of Michael Shannon and Andrew Garfield. Both turn in efforts that rank with the best in their careers (OK, that’s more of a compliment to Shannon, really), relishing in the ambiguity and spontaneity that Bahrani’s film is bathed in. Powerful drama, edge-of-the-seat thriller, perhaps even a horror to many mortgage holders, 99 Homes serves up the scariest, most watchable film about real estate since Beetlejuice.

This dynamically acted, unapologetically contrived pic reps the filmmaker's best chance to date of connecting with a wider audience...

The credit crunch fuels another fascinating drama, this time starring Andrew Garfield as a victim who becomes a real-estate predator.

This is a tough, muscular, idealistic drama that packs a mighty punch, and Shannon and Garfield are excellent.

A powerful and provocative slice of cinema.

An urgent work, the burning anger of which will viscerally connect with many viewers...

A compelling drama with an impressive turn from Garfield as well as Shannon and Dern as Garfield’s concerned mother.