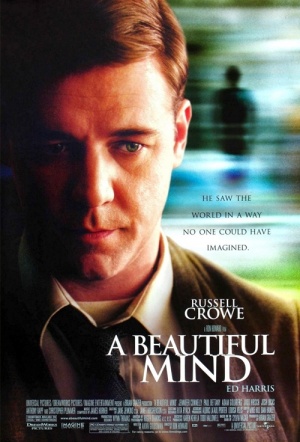 John Nash (Crowe) stood out at Princeton not just for his mathematical brilliance but also his asocial behaviour. Even amongst the greatest minds at the university, his genius was unparalleled, creating completely original theorem and solving the most perplexing of problems. However, as his battle with schizophrenia worsens, so does his grip on reality.

Serious-minded but lively film is distinguished by an exceptional performance by Russell Crowe.

Should be intellectually rejected, but you can't quite banish it from your mind.

Sadly, Howard blands out in the final third, using old-age makeup and tear-jerking to turn a tough true story into something easily digestible. Until then, you'll be riveted.

Crowe brings the character to life by sidestepping sensationalism and building with small behavioral details.

When the film does succeed, it almost seems to do so despite itself.

Certainly gripping. Whether you can fully enjoy its many strengths depends on how comfortable you are with a real, tortured and ultimately tragic life being forced into Hollywood's formulaic straitjacket.