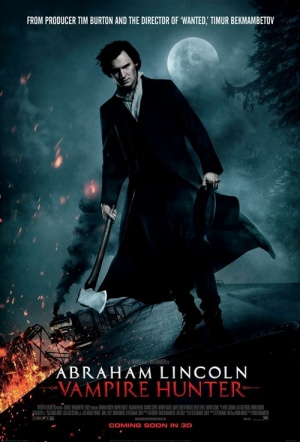 Tim Burton presents this action mash-up of American history and horror fantasy directed by Timur Bekmambetov (Wanted), following the rise of Abraham Lincoln as both a nation’s leader and a hunter of the undead.

Long before any political aspirations, Lincoln (Benjamin Walker) was driven by the desire for revenge against Jack Barts (Marton Csokas) - the killer of his mother. But Barts is no mortal man. Aided by a vampire expert (Dominic Cooper), Lincoln learns to channel his anger into a more noble task: the destruction of all vampires across America.

What [Bekmambetov] doesn't do is offer us any respite from his 3D CGI barrage, an assault on the senses that makes the bullet John Wilkes Booth fired into the real Abe's noggin seem calming by comparison.

This ludicrous CGI extravaganza, based on the comic horror novel by Seth Grahame-Smith, can stand proudly beside the best-worst of Ed Wood and Uwe Boll.

Bekmambetov directs with gusto, and the forthright absurdity of the story, combined with its weirdly heartfelt self-belief is winning.

Without a doubt the best film we are ever likely to see on the subject - unless there is a sequel, which is unlikely, because at the end, the Lincolns are on their way to the theater.

This insipid mashup of history lesson and monster flick takes itself semi-seriously, which is truly deadly.

Genre enthusiasts will lap up the mixture of action and fantasy, while history buffs who don't mind a bit of rewriting will dig into an alternative spin on the Civil War period.

The grave tone makes it stiff and leaden, the digi-saturated look is a turn-off. Damnable and disordered.