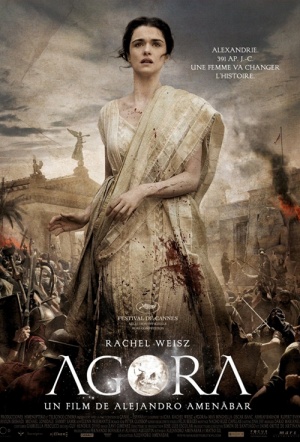 Historial drama set in Roman Egypt, centered on Hypatia (Rachel Weisz), history’s first recorded female mathematician-philosopher and atheist. She lived in Alexandria during the 4th century, in the waning days of the Roman Empire. The daughter of the last director of the famed Library of Alexandria, she was known foremost as a brilliant theorist in astronomy, but 5th-century texts also speak of her forthright participation in public life and her 'extraordinary dignity and virtue'.

As she studies the mysteries of the universe, the paganism of its Roman rulers is being aggressively challenged by the recently legitimised Christians. Alejandro Amenábar’s extravagantly mounted account of Hypatia’s struggle stars Rachel Weisz and a cast of thousands. All hail the first historical epic to swirl around a heroine whose great virtue is her charismatic rationalism. (New Zealand International Film Festival 2010)

The mother of all secular humanists fights a losing battle against freshly minted religious zealots in Agora, a visually imposing, high-minded epic that ambitiously puts one of the pivotal moments in Western history onscreen for the first time.

High-minded and ambitious, Agora is also resplendent and rich, full of striking images. A pity then it’s all such hard work: laboured plotting, heavy-handed dialogue and about as much direction as a broken compass.

A bit of a puzzle. This is a good thing, since most movies plop down in easily recognizable categories and stay there, troubling neither their own intellectual inertia nor that of the audience.

This is a movie about ideas, a drama based on the ancient war between science and superstition. At its center is a woman who in the fourth century A.D. was a scientist, mathematician, philosopher, astronomer and teacher, respected in Egypt, although women were not expected to be any of those things.

The subject is absorbing, but the lack of differentiation in dramatic levels makes the film feel longer than its 126 minutes.

It is a pleasure to see Weisz's scenes of scientific inquiry, which capture the passion of research and discovery without artifice or pretension. That the scientist is a woman makes it all the more engaging.

Always intelligent and thought-provoking, it's a welcome return from Amenábar.

Weisz makes for a vivid, charismatic Hypatia, but the script lets her down.