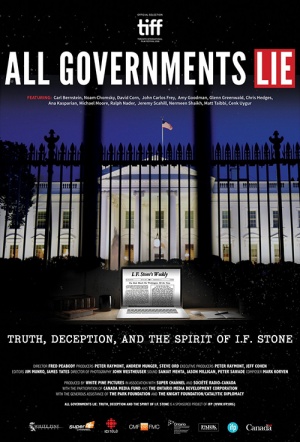 "For decades, maverick American journalist I.F. Stone took on the powers that be — from Red-baiting fearmonger Joe McCarthy to Lyndon Johnson to Ronald Reagan — in the pages of the tiny publication I.F. Stone's Weekly (and later in the New York Review of Books and The Nation), most of it typed, two-finger style, by Stone himself. Working without the "access" to those in power so prized by establishment journalists, Stone took on the system regardless of personal risk. In All Governments Lie: Truth, Deception, and the Spirit of I.F. Stone, Fred Peabody pays tribute to Stone's work and looks at those who carry on his legacy today." (Toronto International Film Festival)

Even if you belong to the choir it's preaching to, it has the rare distinction of being a movie you can agree and argue with at the same time.

Featuring footage from the last six decades, "All Governments Lie" is a timely, convincing documentary that will cause audiences to question what they see and read.