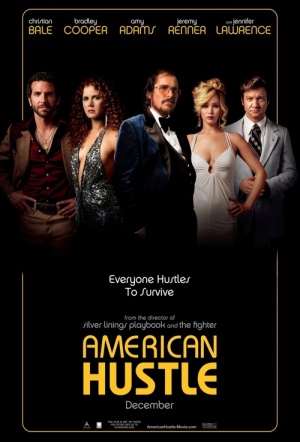 Brilliant con man Irving Rosenfeld (Bale) and his equally cunning partner Sydney (Adams) are forced to work for FBI agent Richie (Cooper), who pushes them into a world of the mafia and Jersey powerbrokers. Carmine (Renner) - a volatile, New Jersey political operator - is caught between the con-artists and Feds, while Irving’s unpredictable wife Rosalyn (Lawrence) could be the one that brings their entire world crashing down...

The con is on in David O Russell's Oscar-bait caper. But the greatest mystery is how a super-camp, slightly indie sting flick found itself rubbing shoulder pads with more serious-minded awards contenders.

Funny, sexy and stylish as hell, Russell's Scorsese homage lacks the zip of Marty's greatest work, but makes up for it with hilarious dialogue and a killer ensemble on top form.

A dynamite crime comedy and identity meltdown that can rekindle one’s faith in movies.

The ghost of Richard M. Nixon hovers in the air; everyone is a fake and everyone wears a mask...

Russell distils his own toxic kind of nitrous oxide and pipes it into the cinema.

An infectious blast of funky jazz played by a terrific cast and a director at the top of their respective games.

An extremely entertaining, brilliantly acted, highly diverting film which - like all hustles - delivers less than it promises. Still, it's worth being taken for the ride.

Clip: Save my Life