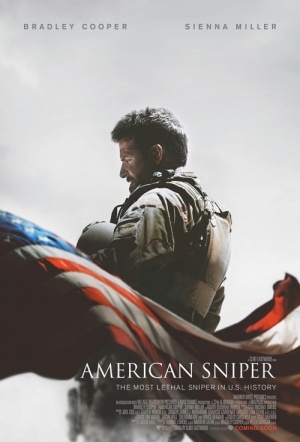 Based on the memoir of Chris Kyle, the most lethal sniper in American military history with 160 confirmed kills (largely undertaken during four tours of the Iraq War). Directed by Clint Eastwood, starring Bradley Cooper as the Navy SEAL and Sienna Miller as his wife Taya Renae Kyle.

At a young age, Texan-bred Chris was raised by his father to be a protector – a sheep dog among the sheep. Carrying that ideal to adulthood, Chris moves on from being a rodeo cowboy to life as a military sniper. Like many other Americans, he believes the war in Iraq is a simple matter of ‘good guys vs. bad guys’. But once deployed, the conflict proves to be more blurred than he anticipated, and as his ‘legendary killer’ reputation increases, so does the fragility of his state of mind. When his tour is over, the trauma stays with him, making life as a new father and husband all the more difficult.

He might not make an impact with his portrayal of rugby (Invictus), spirituality (Hereafter) or larger-than-life figures (J. Edgar), but Clint Eastwood is a cine-messiah when crafting stories about war (Flags of Our Fathers, Letters from Iwo Jima), pride (Million Dollar Baby) and erroneous depictions of what makes a man a legend (Unforgiven). Thankfully, American Sniper stays true to the finest aspects of his career.

American Sniper is a superbly subtle critique made by an especially young 84-year-old.

Less a war movie than a western - the story of a lone gunslinger facing down his nemesis in a dusty, lawless place - it is blunt and effective, though also troubling.

Eastwood's gripping, incurious film gives the impression of having not so much been directed as dictated.

Eastwood and Cooper keep finding respectful complexities in Kyle’s story, until the film reveals itself as too simple to have much use for them.

Eastwood's impeccably crafted action sequences so catch us up in the chaos of combat we are almost not aware that we're watching a film at all.

American Sniper feels very much like a companion piece—in subject, theme and quality—to The Hurt Locker.