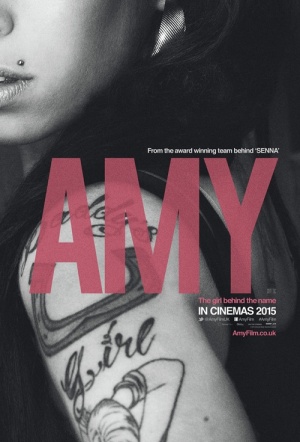 Amy Winehouse documentary from the director of 2010's brilliant Senna. The story of one of modern Britain's defining singer/songwriters is told through interviews with family members, close friends and Winehouse herself. The filmmakers have also been given access to never-before-seen archival footage.

The filmmakers promise an "insightful portrait [that] will focus on the music of Amy Winehouse – the driving force of an incredible talent whose tragic loss was felt deeply by the music industry and music lovers around the world."

This year has brought forth quality documentaries about three of music’s brightest burnouts, each appropriate to the artist. The explosive Cobain: Montage Of Heck smelt unmistakably of teen spirit; Heaven Adores You was as sweetly sensitive as Elliott Smith’s forgiving folk songs; while Senna director Asif Kapadia’s Amy is in-your-face intimate, a tragic rise and fall lit by paparazzi flashbulbs.

Hardly innovative in form, but boasting the same depth of feeling and breadth of archival material that made Kapadia’s “Senna” so rewarding...

Anyone with a beating heart will be forgiven for allowing it to break during this unflinching and thoughtful account of the life and death of the soul singer Amy Winehouse.

A perceptive examination of the singer’s need for love – from her friends, family, colleagues, husband and public – and the ways in which that need went unmet, or was exploited, at the times it ached in her the most.

Kapadia isn't simply revisiting Ms. Winehouse's life and death, but also - by pulling you in close to her, first pleasantly and then unpleasantly - telling the story of contemporary celebrity and, crucially, fandom's cost.

An overwhelming story, and despite everyone knowing the ending, it is as gripping as a thriller

Kapadia provides a heartbreaking reminder of what we lost when we lost her.

It is clear that Kapadia adores her, and wishes to honour her story by telling it without flinching.

An emotionally stirring and technically polished tribute, its sprawling mass of diverse source material elegantly cleaned up, color-corrected and shaped into a satisfying narrative.

Despite the bittersweet irony of the story of her life being constructed from the news media's and her acolytes' cataloging of her self-destructive nosedive, there's a heartbreaking immediacy and authenticity in its telling.