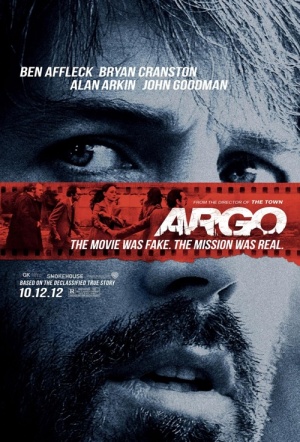 Ben Affleck directs and stars in this Academy Award-winning thriller, the true story of a plan hatched by the CIA to rescue six U.S. diplomats from Iran in 1979. To do so, the Agency teams up with a Hollywood producer to fake a sci-fi movie production, using a location shoot as the pretext to get its people out.

When the U.S. Embassy in Iran is stormed by Islamic students and militants, six embassy staff escape in the confusion. The U.S. Government desperately seeks to get them out of the country before they are found and executed as spies - enter exfiltration specialist Antonio Mendez (Affleck). Mendez goes to Hollywood and works with a make-up artist (John Goodman) and producer (Alan Arkin) to fake the production of a sci-fi film, something that can explain Westerners moving in and out of the country. Then it's off to Tehran, for a rescue mission right under the noses of the new hardcore Islamic regime.

Ultimately, the thrill of Argo is in watching how the illusion-making of movies found such an unlikely application on the world political stage, where the stakes were literally life and death.

No performances stand out, which is a shame given Affleck's track record with actors. Ultimately, it comes down to a chase to the airport, with a scary Revolutionary Guardsman at the gate.

In the end, this is a story about outwitting rather than killing the enemy, making it a homage to actual intelligence and an example of the same.

There's a degree of puffery in the writing, however, that makes this drama untrustworthy.

Argo the real movie about the fake movie, is both spellbinding and surprisingly funny.

Affleck easily orchestrates this complex film with 120 speaking parts as it moves from inside-the-Beltway espionage thriller to inside Hollywood dark comedy to gripping international hostage drama, all without missing a step.

Argo is a crackerjack political thriller told with intelligence, great period detail and a surprising amount of nutty humor for a serious look at the Iran hostage crisis of 1979-81.

The film makes a beautiful job of juggling laughs and real drama.