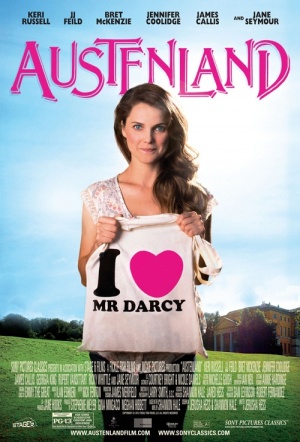 Keri Russell (Felicity) plays 30-something Jane Hayes, an American obsessed with Mr. Darcy in the BBC production of Pride and Prejudice. With her love life suffering and most men's inability to match up to that charming, fictional leading man, she spends her life savings on a trip to Austenland - an immersive Jane Austen experience on a majestic English estate. En route she meets an eccentric group of similarly obsessed characters, including the handsome, Darcy-esque Henry Nobly and down-to-earth Martin (Flight of the Conchords' Bret McKenzie). This is the feature debut from Jerusha Hess, co-writer of Napoleon Dynamite.

Bridget Jones may be dead but Mr Darcy is well and truly alive in this incredibly silly, not-terribly-literary but very funny comedy. The Jane Austen theme park setting - in which guests are promised to enjoy a romance with one of the suitors while pretending to live within the claustrophobic social rules and courting rituals of the Regency era – means that broad humour, rather than witty satire, rules the roost.

Austenland doesn’t really satirize Austen’s world (or fans) so much as use them as a pretext for a mixture of middling burlesque and routine romantic comedy.

Too witless to be a decent comedy, too charmless to call itself a parody, this messy adap of Shannon Hale’s novel groans under the weight of a predictable plot and explosive overacting, although Bret McKenzie wrestling awful dialogue at least brings a touch of adorability as the resort’s elfin stable lad.

The Napoleon Dynamite cowriter-turned-director should have applied her editorial eye more consistently; Coolidge and King especially are allowed to wander into mugging far too often and for far too long.

It is smart and surprisingly literate, its only downfall being in that, in riffing on the work of a very talented writer on the subject of men and women, its screenplay could have used a little more of Jane Austen's immaculate sense of storytelling.

Austenland embraces convention, and the result is a romantic comedy in which the ending seems not just foreordained, but promised via contract from the first moment of the film.

Hess gets her romance just grounded enough to handle the comic extremes supplied by the supporting cast.

Fondly conceived but short of that razor-sharp Jane Austen wit.