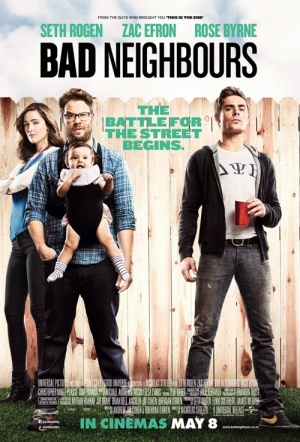 The director of Forgetting Sarah Marshall brings Seth Rogen and Rose Byrne into this no-holds-barred neighbours-at-war comedy as a happily married couple settling into parenthood, forced to confront the noisy douchebag fraternity that's moved in next door fronted by Zac Efron (and his abs). Co-starring Dave Franco, Christopher Mintz-Plasse and Lisa Kudrow.

Mac (Rogen) and Kelly (Byrne) are doing their best to feel young, cool and spontaneous, even though having a baby has cramped their style. When a fraternity moves into the neighbourhood the couple fear the worst. Frat leaders Teddy (Efron) and Pete (Franco) make a good first impression, but the student's constant partying proves unbearable and a battle between neighbours commences.

Russian playright Anton Chekhov's rules of drama dictate that if a two-storey bong is mentioned in the first act, then it must be smoked by the third act. Despite failing to adhere to this rule (said bong is sadly never seen in action), Bad Neighbours is a hoot of a film that delivers way more laughs that we've come to expect from a studio comedy.

A heated, hysterical battle between Apatow smarts and Animal House smirks. Subtlety takes a hazing, but humour emerges with honours.

After a shaky start it blossoms, with inspired visual gags in excellent poor taste.

Filthy, nasty and a bit too sloppy. But it’ll scrub up lovely.

An uproarious and hugely commercial vision of intergenerational warfare.

Not since Bridesmaids has an American comedy channelled the chortles like what transpires here... churns up so many waves of big, booming laughter.

A few big laughs but weakly drawn characters mean a film that is enjoyable enough in the moment but then quickly forgotten.