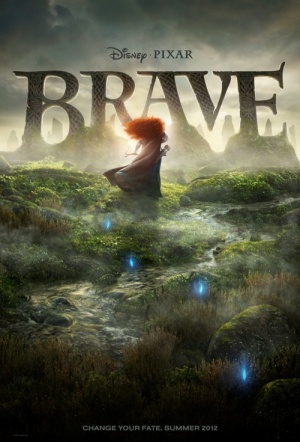 Disney and Pixar's Academy Award-winning animated adventure about Merida (voiced by Kelly McDonald), a Scottish princess who confronts tradition, destiny and the fiercest of beasties. A skilled archer and the spirited daughter of King Fergus (Billy Connolly) and Queen Elinor (Emma Thompson), Merida is determined to follow her own path.

She defies an age-old custom to marry the sons of the land’s lords: massive MacGuffin (Kevin McKidd), surly Macintosh (Craig Ferguson) and cantankerous Dingwall (Robbie Coltrane). But this inadvertently unleashes chaos and fury in the kingdom, forcing Merida to undo a beastly curse before it's too late.

In addition to being fast, funny, and unpretentious, Brave is a happy antidote to all the recent films in which women triumph by besting men at their own macho games...

The animation studio's first film with a female protagonist, a defiant lass who acts as a much-welcome corrective to retrograde Disney heroines of the past and the company's unstoppable pink-princess merchandising.

Brave offers a tougher, more self-reliant heroine for an era in which princes aren't so charming, set in a sumptuously detailed Scottish environment where her spirit blazes bright as her fiery red hair.

This isn't the NASCAR-fellating cash grab that is the Cars franchise, but it's still Pixar on preachy autopilot.

Pixar's 13th feature plays it safe and old-fashioned rather than risky and adventurous.

There's no denying the film's refrain that legends are lessons, but Brave is sadly remedial.

At its best, Brave accesses all the complicated feelings involved between a parent and a rebellious adolescent.