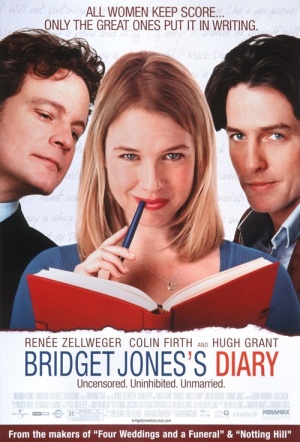 Renée Zellweger picked up a 2002 Best Actress Oscar nomination for her performance as Bridget Jones in this romantic comedy hit, based on the Helen Fielding book. Bridget is caught in a Jane Austen-esque love triangle between her debonair boss (Hugh Grant) and friend of the family, Mark Darcy (Colin Firth).

Bridget is a busy journalist and singleton lost amid a sea of smug-marrieds in London. After vowing to abandon her many vices, Bridget turns over a new page by channelling her opinions and insecurities in a journal that becomes a chronicle of her misadventures. Soon, Bridget finds herself stuck in the sights of not one, but two men.

Misses its mark, failing to capitalize on the staccato rhythms and sardonic wit of Bridget's inner life.

This ultra-hyped adaptation of the ultra-successful Helen Fielding novel sends you out with a smile on your face.

This is a strong debut from former documentary-maker Sharon Maguire, who directs with chutzpah and style.

A story like this can't work unless we feel unconditional affection for the heroine, and casting Zellweger achieves that.

A film full of wit, warmth and honest, knowing humor, topped off with a plethora of excellent performances.

One of the most genuinely funny romances for some time.

It's Hugh Grant, cleverly cast against type as a scheming love rat, who steals the laurels.