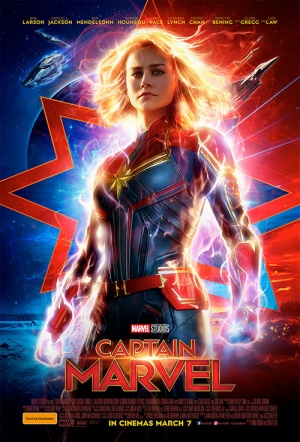 Set in the 1990s in a previously unseen period in the history of the Marvel Cinematic Universe, the film follows Carol Danvers (Larson) as she becomes one of the universe’s most powerful heroes. While a galactic war between two alien races reaches Earth, Danvers finds herself and a small group of allies at the centre of the maelstrom.

They have brought off something exciting, embracing the Marvel house style and, within that, crafting a tale with enough tricks and moods and sleight-of-hand layers to keep us honestly absorbed.

Brie Larson isn't given enough to do in a Marvel movie that marinates in '90s nostalgia but doesn't quite rise to the occasion of its own significance.

This is the first in a while that I’ve found myself immediately hungry to revisit.

An entertaining new part of the saga.

With the inevitable bombast and posturing of Avengers: Endgame to come, this is a great way to remember just how much fun a comic-book movie could and should still be.

Nicely balancing the Earth-bound elements with epic cosmic action, Captain Marvel is yet another winner from the house of M.

As a Nick Fury buddy comedy, it’s fun. As a feminist fable it’s essential. This takes a while to really get going, but when Carol Danvers takes off she is unstoppable.