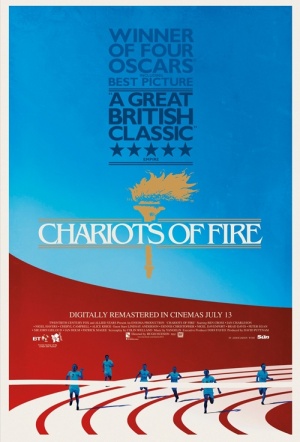 British sports classic, based on the true story of the English athletes preparing for, and competing in, the 1924 Summer Olympics. Winner of four 1982 Oscars including Best Film. The slow motion running scenes and Vangelis' score are iconic and unforgettable. Now try and get the theme out of your head. You can't? You're welcome.

Like every element in this picture, the actors look right; they seem to emerge from the past, instead of being pasted on to it, as so many characters in historical movies seem to be.

[An] airless saga of university toffs building themselves up to run for God and country at the 1924 Summer Olympics in Paris.

Really this is an overblown piece of self-congratulatory emotional manipulation perfectly suited for Thatcherite liberals.

A bold, intelligent, romantic film with all the lineaments of a classic, and a score by Vangelis as instantly hummable as the music for Jaws.

This is strange. I have no interest in running and am not a partisan in the British class system. Then why should I have been so deeply moved by Chariots of Fire?

An odd, malformed antique that still manages to retain a certain surface-level charm.

Now, 20 years later, it's dated. In some ways that actually benefits the film as its true age somehow helps its 1920s setting but other aspects suffer.