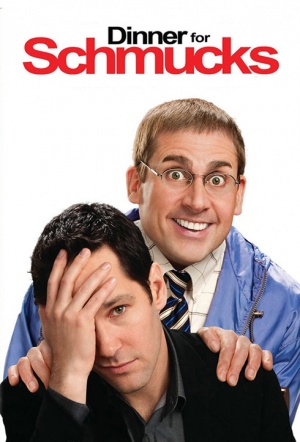 Businessman Tim (Paul Rudd) is happy to have met the incredibly stupid, amazingly dense Barry (Steve Carell). He brings him along to his boss' monthly dinner party where guests are challenged to bring along the dumbest person they can find, for the amusement of the group. But instead of being congratulated for bringing such a moron, Tim finds his life spiralling out of control with a series of personal and professional disasters as his new 'friend' accidentally paves a path of destruction.

The cast of comic gold is rounded out by Conchord Jemaine Clement, Hangover beardy man Zach Galifianakis and Office Space's Ron Livingston. This is a re-make of French comedy The Dinner Guest.

While Rudd is a somewhat bland lead and Clement is clearly standing in for Russell Brand while playing an avant-garde over-sexed artist, the film provides a great showcase for Carell's brand of deadpan nuttiness. Playing a taxidermied mice diorama-creating IRS employee, the close-cropped Carell (almost a dead ringer for NZ's own idiot-savant Paul Henry) is a constant hoot, especially when he does things like describe how Louis Pasteur turned cheese into medicine.

The film collects a cast of performers who know how to be funny. The success of this movie, following a formula upheld by just about any recent hit comedy you can name, lies as much with supporting players and plot-derailing set pieces as with the central story and characters.

The guests at the dinner are a strange lot. To describe them would be to give away their jokes, and one of the pleasures of the movie is having each one appear

While the climactic dinner is a bit too much like a circus audition, Roach -- who helmed the "Austin Powers" movies as well as "Meet the Parents" and "Meet the Fockers" -- knows how to enjoy each sideshow.

Though Carell and Rudd are both saddled with characters that just aren't as interesting as many they've played in the past, the movie benefits from having drawn many gifted comedians to supporting roles.

Hardly a classic given the talents of Carell, Rudd and Roach at his best. It bungles utilising plenty of talent in a lightweight comedy effort that brings little fresh to the table.