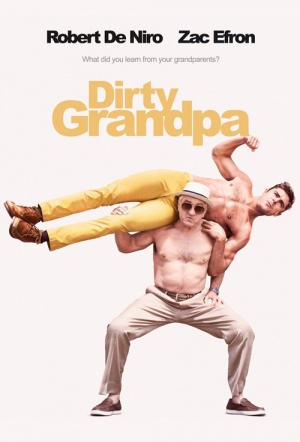 Robert De Niro and Zac Efron are grandpa and grandson in this raunchy road-trip comedy that starts at a funeral and ends up at Spring Break. Co-stars Julianne Hough (Rock of Ages) and Aubrey Plaza (The To Do List).

Jason Kelly (Efron) is one week away from marrying his boss’s uber-controlling daughter, putting him on the fast track for a partnership at his law firm. But when the straight-laced Jason is tricked into driving his foul-mouthed grandfather, Dick (De Niro), to Daytona for spring break, his pending nuptials are suddenly in jeopardy. Between riotous frat parties, bar fights, and an epic night of karaoke, Dick is on a quest to live his life to the fullest and brings Jason along for the ride...

It looked like just another crappy comedy. Robert De Niro has been in some of the greatest films of all time, but his modern comedies are mostly rubbish and include abominations like Little Fockers. As for wee Zac Efron, he's laughable when he's trying to be serious and the unfunny guy that comedians use to be funny in comedies.

This contemptible fiasco is not only comfortable courting laughs through ugly mockery of minorities, but also doesn’t even have the courage of its own crass-as-I-wannabe convictions.

Tinged with the sadness of watching a beloved elderly relative making a bloody old fool of himself.

Like watching a friend's mediocre improv troupe do an extended spring-break sketch. And your friend just happens to be Robert De Niro.

The film hinges on the solipsistic idea that libido in the elderly is somehow outrageous and hence, dirty.

Feels like spending 100-plus minutes with a scatalogical toddler, proudly showing you what he made in his diaper.