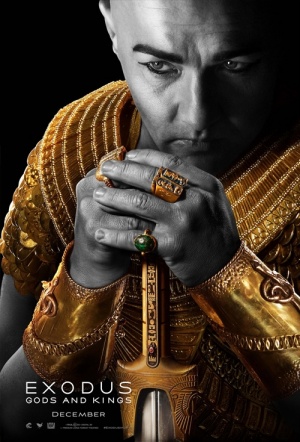 Raised as a brother to Pharaoh-in-waiting Ramses, Moses has no idea he is himself Hebrew, a people enslaved by the Egyptians. Despite fighting shoulder-to-shoulder with Ramses, the pair find themselves at odds after a battlefield prophecy comes to pass. Eventually Moses finds himself banished after the conniving Hegep (Mendelsohn) informs Ramses, now Pharaoh, of his true lineage. Returning to Egypt years later, Moses tries to convince the Pharaoh to free the Hebrew people, but Ramses' refusal and cruel response unleashes the wrath of God upon the land.

Succeeds in conjuring a mighty and momentous spectacle while turning [Ridley Scott's] own skepticism into a potent source of moral and dramatic conflict.

Let my people go see something else.

A Biblical epic to shake your faith in the order of things, not reaffirm it.

It is half turkey, half triumph.

No movie with such a limp ending can be fully satisfying, and the beginning also falters. But the long middle section is a rousing good show.

Confuses and frustrates with an uneven mix of camp and tragedy layered through Scott's controversial biblical spectacle.

Its spiritual uncertainty - and lack of triumphalism - perhaps robs it of a truly satisfying, cathartic conclusion, but also makes for a truly modern, thoughtful biblical blockbuster.