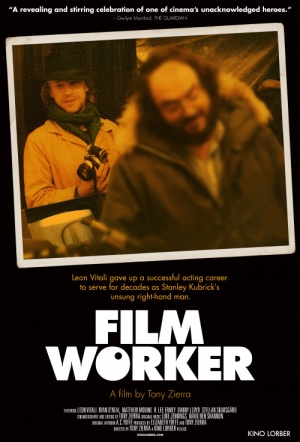 "After numerous roles on British television, Vitali was on the verge of an international acting career when he starred in Kubrick’s 1975 film, Barry Lyndon. The experience changed his life. Driven by his fascination for Kubrick and the filmmaker’s creative approach, he unpredictably switched focus. With the notable exception of Eyes Wide Shut, Vitali spent the rest of his working life behind-the-scenes on Kubrick films.

"A notorious control freak, Kubrick expected Vitali to tackle everything from casting to making endless notes and tracking prints, at any hour of the day or night. Tony Zierra’s film provides a unique insight into the working processes of this infamously private director, alongside the story of one man’s life-changing obsession." (Sydney International Film Festival)

It's a portrait of Kubrick's right-hand man, who devoted himself to the religion of all things Kubrick, but beyond that the film has a special value: It ushers you into the world of how Kubrick put his movies together.

The portrait he creates of his former boss reveals a man of great curiosity, generosity and creativity, but also a frequently imperious and unreasonably demanding perfectionist.

A revealing and stirring celebration of one of cinema's unacknowledged heroes.

Filmworker is a portrait of an unsung hero, a revealing look at how Kubrick's films were made and a psychological sketch of a would-be Da Vinci determined to keep dusting and polishing someone else's Sistine Chapel.

But as a portrait of a man who surrendered his career and much of his life to the service of a master, "Filmworker" proves compelling, particularly for those with a passing interest in Kubrick.

The film honours the hard-working, often unacknowledged craftsmen in the film industry and stirs provocative questions about the fine line between legitimate devotion to an artist and dangerous hero worship.

Filmworker is an absorbing, important portrait of both a genius at work and the man behind the scenes who made the magic possible, whatever the cost to himself.