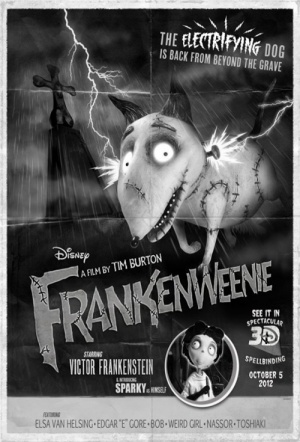 Tim Burton’s 3D, monochrome stop-motion animated film about young Victor who conducts a science experiment to bring his beloved dog Sparky back to life, only to face unintended and monstrous consequences.

After Sparky's untimely death, Victor harnesses the power of science to bring his best pal back to life - with just a few minor adjustments. He tries to hide his home-sewn creation, but when Sparky gets out, Victor’s friends (including Elsa, voiced by Winona Ryder), enemies, parents (voiced by Catherine O'Hara and Martin Short) and the entire town all learn that getting a new 'leash on life' can be disastrous.

Over 200 puppets were created for the movie which began life as Burton's 1984 short film, a comedy homage to Frankenstein.

'Frankenweenie', scripted by John August, and based on a screenplay by Lenny Ripps from Burton's original story, is tight and brief, hitting all the marks you'd expect from an animated kid's film, and enlivened by Burton's visual style. The man should make more small movies like this one.

Burton's finest, freshest film in ages is a welcome homecoming. You'd call it patchwork pastiche, if it weren't so zapped with energy, feeling and imagination. It's alive!

Though the tale demands a darker outcome, the director disappointingly goes the Mouse House happy-ending route with a reprise of the original short film's finale - one that somehow plays with even more cringeworthy sentimentality.

'Frankenweenie' has that youthful verve and the ghoulishness of strange kids who will some day be eccentric creators. This movie is an attic experiment for its makers to be proud of and for audiences to cherish.

It's a likeable film, though not a sensational development in Tim Burton's career.

This isn't one of Burton's best, but it has zealous energy. It might have been too macabre for kids in past, but kids these days, they've seen it all, and the charm of a boy and his dog retains its appeal.