Let me begin this review by mentioning where I stand on comic books. I rarely read many anymore, but in the past I have dipped my toe into a few series and enjoyed them, even forming limited attachments to certain characters, and as such I have feelings and opinions concerning how they are portrayed on screen. Green Lantern was not one of these characters. I was aware of the basic story, had some sense of what his powers were, and I even had a Green Lantern action figure as a kid. But I never read the books, and so, approaching Martin Campbell's Green Lantern, I really had no idea what to expect. What I saw in the trailers looked cool enough that I was excited by what this film could be, but my usual gut-feeling about how a movie will turn out was absent. After seeing Green Lantern this morning, I'm still at a loss to describe how I feel about it. The film features some of the most interesting and stunning visuals I've seen in a while, certainly streaks ahead of this years previous comic book offerings X-Men: First Class and Thor, but, regrettably, the quality of the visuals can't make up for the muddled plot and dreadful pacing issues, particularly in the film's conclusion.

There is a lot that Campbell gets right with Green Lantern. Firstly the casting, always of utmost importance in a superhero film, is solid. All participants make the most of their roles, with Ryan Reynolds as Hal Jordan a particularly inspired choice. This is the type of role Reynolds was born to play, and he clearly understands the journey Jordan takes over the course of the film. Bringing his natural charm to elevate the character above the by-the-numbers troubled hero Jordan could have been, he's the best thing about the whole film. Supports are good too, with Peter Sarsgaard wickedly creepy as Hector Hammond, and Mark Strong as Lantern Corps leader Sinestro making the best of smaller parts. It's also nice to see Campbell keeping it Kiwi with roles for Temuera Morrison and Taika Waititi, although both are underused. Campbell also nails the look of Green Lantern, and the delicate but masterful use of colour (perhaps unsurprising in a film with a colour in the title) shows his visual expertise as a filmmaker. Freed from the restraints of a realistic setting, Campbell really lets loose with his great visual style in scenes that take him away from Earth. Too often superhero films are hampered by the perceived need to keep proceedings grounded in reality to give mass audiences something to better relate to, and much like Marvel's Thor, the sci-fi heavy sequences set in far-off fantastical locations offer refreshing variety. It is however spectacularly geeky, and as much as certain core fans will undoubtedly be crying for more of this style in future comic adaptations, conservative studio thinking is likely the reason we'll never see a Green Lantern movie set entirely off-Earth.

Green Lantern, despite all it has going for it visually, falls down at the story level, perhaps an effect of having four writers working on the script at various times. Adding originality to an origin story is always going to be a challenging task, and the story spends too much time on build-up before rushing to a conclusion, which ultimately seems a touch too easy. Obviously Warner Bros. are counting on the success of the film to launch a new franchise, so therefore Jordan's triumph was a foregone conclusion, but Campbell doesn't spend enough time developing the threat presented by the film's villain, and as such when the confrontation comes it never feels like anything is really at stake. It's an exciting sequence while it lasts, despite its overly obvious terrorism parallels, but it's just over much too quickly, and the colossal visual scale of the villain which Campbell reaches for is unmatched by the battle itself. There's an uneasy balance between the small-scale human story and the epic overarching plot, and unfortunately Green Lantern comes off as unsure of what exactly it wants to be.

So, here I sit, unsure of what to make of Green Lantern. There's potential in it, elements we'll hopefully see explored in the inevitable sequel. As an introduction to a lesser known character (at least for mainstream audiences) it's passable, and for the wow-factor of the visuals alone it may be worth seeing in the cinema. Personally though, I think Green Lantern will be filed under 'interesting failure'. 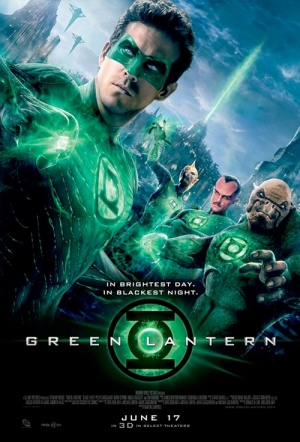