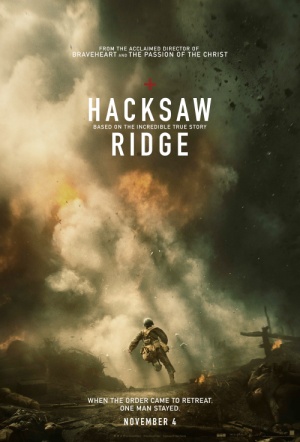 Andrew Garfield (The Amazing Spider-Man) leads this World War II true story about Desmond Doss - a conscientious objector who went to war but refused to fire a bullet, choosing to enter the battlefield without a weapon. Directed by Mel Gibson.

In Okinawa during the bloodiest battle of WWII, Desmond Doss (Garfield) saved 75 men without firing or carrying a gun. He believed the war was just, but killing was nevertheless wrong; he was the only American soldier in WWII to traverse the front lines without a weapon. As an army medic, Doss single-handedly evacuated the wounded from behind enemy lines, braved fire while tending to soldiers and was wounded by a grenade and hit by snipers. He was the first conscientious objector to ever earn the Congressional Medal of Honor.

Mad Mel is back with a long-overdue follow-up to his greatest directing accomplishment, Apocalypto. His flirtations with fascinating, exotic period pieces told in extinct languages sadly seem behind him, however, as he's delivered a highly simplistic Hollywood heartstring-tugger.

It immerses you in the violent madness of war - and, at the same time, it roots its drama in the impeccable valour of a man who, by his own grace, refuses to have anything to do with war.

As he did so well in Braveheart, Gibson explores the reasons men fight for their country rather than just reveling in blood and gore.

There aren't many shades of grey in 'Hacksaw Ridge', but it follows through its purpose with vigour, confidence and swagger.

A bluntly effective faith-and-flag war drama, the true story of a remarkable hero with a knot of moral tension at its center.

As repellent a figure as many may still find Gibson, I have to report he's absolutely hit Hacksaw Ridge out of the park.

For all that less-than-subtle cinematic magpieing, Hacksaw Ridge is a deeply gripping and engrossing film made with passion, if perhaps a little too much bombast.

This film is not for the faint-of-heart and nor should it be. Go armed with the knowledge that war is hell and Gibson doesn't want us to forget that.

Gibson's forceful comeback is a violent drama about pacifism that succeeds in combining horror with grace.

...undeniably moving...a well-crafted tale of the valour of man in truly harrowing circumstances...