Hara-Kiri: Death of a Samurai 3D 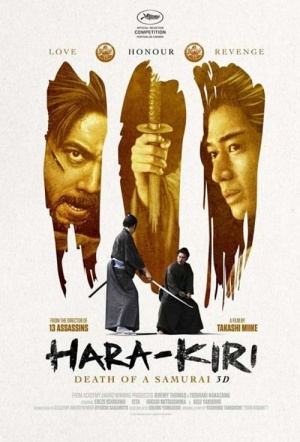 Japanese director Takashi Miike’s (13 Assassins, Ichi the Killer) 3D remake of the 1962 samurai classic. Centers on a poverty-stricken warrior discovering the fate of his ronin son-in-law, setting in motion a tense showdown of vengeance against the house of a feudal lord.

"Seeking a noble end, poverty-stricken samurai Hanshiro requests to commit ritual suicide at the House of Ii, run by headstrong Kageyu. Trying to dismiss Hanshiro's demand, Kageyu recounts the tragic story of a similar plea from young ronin Motome. Hanshiro is shocked by the horrifying details of Motome's fate, but remains true to his decision to die with honor. At the moment of the hara-kiri, Hanshiro makes a last request to be assisted by Kageyu’s samurai, who are coincidentally absent. Suspicious and outraged, Kageyu demands an explanation. Hanshiro confesses his bond to Motome, and tells the bittersweet tale of their lives... Kageyu will soon realize that Hanshiro has set in motion a tense showdown of vengeance against his house." (Cannes Film Festival 2011)

It proceeds slowly and gracefully, and the few scenes of bloodshed are emotionally intense rather than showily sensational.

Reveals a dramatic connection between Hanshiro and Motome, and exposes an icy hypocrisy and abject power-worship at the heart of the warrior code.

Miike brings a formal, elegant restraint to his usual flair for wild theatrics.