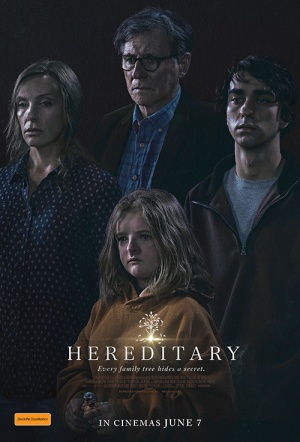 "The Graham family starts to unravel following the death of their reclusive grandmother. Even after she’s gone, the matriarch still casts a dark shadow over the family, especially her loner teenage granddaughter, Charlie, whom she always had an unusual fascination with. As an overwhelming terror takes over their household, their peaceful existence is ripped apart, forcing their mother to explore a darker realm in order to escape the unfortunate fate they've inherited." (Sundance Film Festival)

It’s not often you’ll see an American horror movie so willing to methodically process the aftermath of personal tragedy. Hereditary does that, and then some. Hereditary just stays in the hurt. The suffocating stench of flower bouquets at a funeral. The deafening silence of returning to your home after a loved one has passed. The family unit threatening to implode from repressed guilt. This is grief as a festering, gangrenous wound.

Describing a horror movie as scary is like saying a comedy is funny: a plaudit so general and box-ticking it means almost nothing, beyond basic acknowledgment that a filmmaker has in some way succeeded in their intention. The juicy bit is always considering why. This is not necessarily a simple task when a scary movie comes along like writer/director Ari Aster’s hell-raising debut Hereditary, tapping into impulses we barely understand or think about – let alone spend much time analysing.

When you pare away its demonic accoutrements, you're left with the most intractably nightmarish arena of all: hearth and home.

Collette's performance is staggering. She plays Annie as a woman who begins to wear her buried rage and guilt on the outside.

Hereditary is a terrifically unsettling look at the howling despair of grief, combined with that good, old-fashioned fear of what demons we may have inherited from our parents.

A harrowing story of unthinkable family tragedy that veers into the realm of the supernatural, Hereditary takes its place as a new generation's The Exorcist - for some, it will spin heads even more savagely.

The paradox of Hereditary is that a film seemingly cut off from everyday experience nonetheless pushes buttons very close to home.

It's not this generation's Exorcist, but it's still a lot of frightening fun.

Hereditary takes the core haunting element of a spirit with a malevolent agenda and runs with it in a seemingly endless series of unexpected directions over two breathless hours of escalating terror that never slackens for a minute.

...an easy film to recommend to adventurous genre lovers.