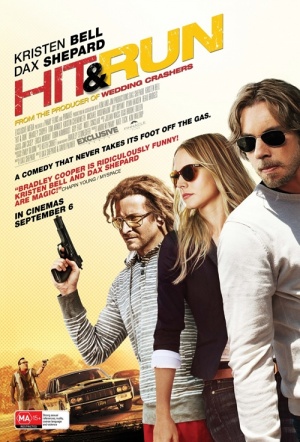 A former getaway driver and his girlfriend are on the run from his former comrades in this action-comedy starring Bradley Cooper, Tom Arnold, Dax Shepard and Kristen Bell. From the producers of Wedding Crashers.

When his past comes back to haunt him, Charlie (Shepard - also the film's writer and co-director) breaks from the witness protection plan to drive his girlfriend (Bell) to Los Angeles. Charlie's former gang, led by convict Alex (Cooper), and the police, led by a US Marshal (Arnold), give chase.

Above all, real-life couple Shepard and Bell bring genuine chemistry to this high-energy excursion.

Interminable scenes of macho posturing and mock-Tarantino dialogue (including a lengthy dissection of the word fags!) mark time between a number of ineptly staged car chases that would embarrass the makers of 'Cannonball Run II.'

There's a lot of funny stuff, but the most unexpected comes from Arnold, who has been uneven, to say the least, in his movies.

Sadly, Hit & Run, for as much sporadic fun and genuine heart it has, runs out of gas. But it's not for lack of trying, and that counts for something.

One of the summer's great escapes - no mean feat in a year that has attempted, but failed, to provide fun, mindless, movie fare.

There really ought to be a lot more movies like Hit & Run, but only if they're just a little bit better.