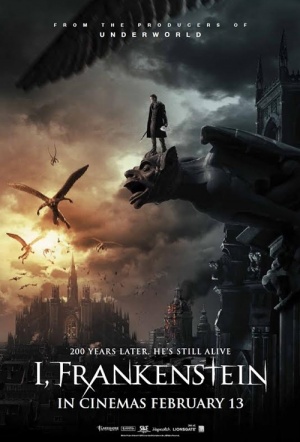 Aaron Eckhart plays Frankenstein's monster, drawn into a conflict between heaven and hell when demonic forces seek his immortality. Based on the Darkstorm graphic novel depicting what happened after the events of Mary Shelley's 1818 novel. From the director of Tomorrow, When the War Began.

As if Frankenstein's monster didn't have it tough enough, moments after burying his creator in the early 18th century he is attacked by demons and only saved by the intervention of winged rescuers. What he then discovers is a war that has been raging for millenia between demons and the transforming gargoyles of heaven, the latter not only proving to be his saviour but giving him his freedom and a name - Adam.

In the present day, Adam pursues the demons he knows are seeking him and his immortality, but gets caught between the two spiritual forces once more when the demons intensify their efforts to find him. Led by Prince Naberius (Bill Nighy) the forces of darkness have almost discovered the key to reanimating the dead and Frankenstein's creation may provide the missing piece to a puzzle that will result in mankind's damnation.

He's alive! But you might wish he wasn't after seeing this knuckle-headed fantasy.

The blinkered screenplay and indifferent performances fail to lift the eschatology and self-searching off the page.

One more run around that boringly realised, CGI-reliant, blue-grey netherverse that takes enduring fantasy creations as the basis for barely functioning multiplex-filler.

Employs a strictly humorless, gothic approach to the material that makes one long for the satirical touches of James Whale, let alone Mel Brooks.

Back to the drawing board for the mad scientists who cobbled this together. Five parts bad to one part camp nonsense.