The Best "Iron Man" Suit Yet

After the blockbuster hit of 2012, "The Avengers", Marvel Films steamrolls into their second phase of films that will next conclude at the "Avengers" sequel.

Leading the charge again is Iron Man, the character who started off the successful chain of films that have been released so far, involving characters from the Marvel Universe.
With two films, and cameo's throughout the chain, how does the characters third film stack up? Especially now with the weight of the "Avengers" success on it's shoulders?

Tony Stark is in trouble. Not from an enemy, but himself. After the attack on New York in the "Avengers", he has become his own worst enemy and fortified his Iron Man armory. A new enemy then appears, calling himself the Mandarin, who terrorises the American way.
Iron Man must enter the fray, but can Tony Stark?


With director Shane Black now at the helm, "Iron Man 3" is back and better than ever. The film is pure Black through and through. With strong, quick and witty dialogue throughout the film, Black confidently takes the usually cocky Tony Stark on a journey through the fear of one's mortality.
Expertly portrayed by Robert Downey Jr., who by now wholly owns the character, their previous work together from "Kiss, Kiss, Bang, Bang" comes through in scenes where the lines move as fast as the action.
Surrounding Downey with the great supporting cast from the previous films, including former director Jon Favreau resuming his role as "Happy Hogan", Black only reinforces them with quality turns from Guy Pearce, Rebecca Hall and Sir Ben Kingsley as the antagonist, The Mandarin.
Avoiding an enemy who could have been completely campy, he creates a villain who can match Tony on every level, and turns out to be even more so.
What Black does best though, is completely remove Stark from the suit. More often than not, it is Tony who is fighting in this film, rather than the armored Iron Man. With the assistance of a local boy in a small U.S town, it all comes together to lead to a conclusion for the character that defines their status of "superhero".
And while Black's strength revolves around dialogue and characterisation, he brings one more to the table with a fantastic visual eye for action.
Showcasing a plethora of new technology developed by the character, it goes bigger, badder and crazier with each set-piece that occurs.
From exploding mansions, to escapes and a final battle that matches that of the "Avengers", it helps bring together a sum of parts that is completely gratifying. 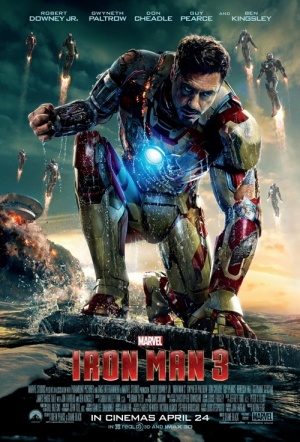