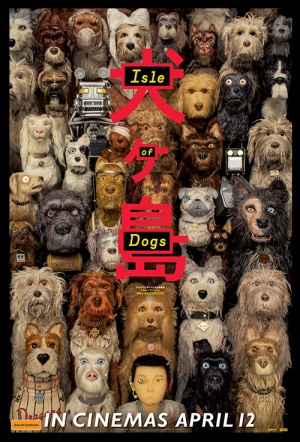 The voices of Bryan Cranston, Bill Murray, Jeff Goldblum and Edward Norton star in Wes Anderson's stop-motion animated comedy about a Japanese boy who sets out on an adventure to find his dog.

When, by Executive Decree, all the canine pets of Megasaki City are exiled to a vast rubbish-dump called Trash Island, young Atari Kobayashi (newcomer Koyu Rankin) sets off alone in a miniature Junior-Turbo Prop and flies across the river in search of his bodyguard-dog, Spots. There, with the assistance of a pack of newly-found mongrel friends, he begins an epic journey that will decide the fate and future of the entire Prefecture.

Undoubtedly, Isle of Dogs is lovingly crafted - as with Fantastic Mr. Fox, stop-motion animation proves a perfect means of conveying Anderson’s aesthetic. But even admiring, and often adoring, the craftsmanship on display couldn’t overcome its meandering, surprisingly even managing to bore despite the plethora of interesting ideas at play.

Say "Isle of Dogs" fast and it comes out sounding an awful lot like "I Love Dogs" - which makes sense, since that's pretty much the chief takeaway from Wes Anderson's delightful new animated feature.

Don't let the fluffy faces fool you. Wes Anderson's latest animation delivers talking dogs and snicker-inducing scenarios. But it's also bleak and frequently unsettling, a dazzling family movie with the darkest of hearts.

This is by some measure Anderson's weirdest concoction ever, in all sorts of good ways. And it probably counts as his most daring, too.

If you've ever liked Wes Anderson before, it will quite probably be one of your favourite and best-remembered films of 2018.

Anderson's trademark tongue-in-cheek humour and deadpan quips are there to ease the way, which seem more fluidly delivered by puppets than in Anderson's live-action fare.

Anderson is clearly a dog lover himself and his film is bound to appeal to anyone who shares his passion. All in all, the film is quite a treat.

The unique charm of Isle of Dogs is its bottomless vault of curios, its sly humour, playful graphic inserts and dexterous narrative detours. An Ode to Dogs