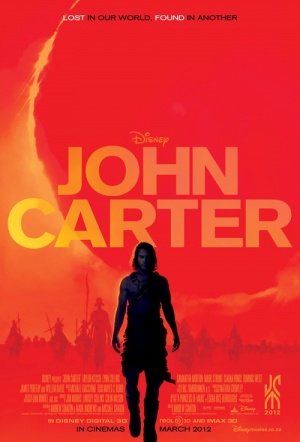 Disney 3D sci-fi action-adventure in which Civil War vet John Carter (Taylor Kitsch, Battleship) is transplanted to Mars and becomes embroiled in an epic battle amongst the planet's inhabitants.

Formerly an Earthlike world, Mars became less hospitable when the oceans evaporated, the atmosphere thinned and the planet devolved into barbarism with the inhabitants - 12-foot tall green thugs called Tharks - fighting one another to survive. After encountering Thark leaders Princess Dejah Thoris (Lynn Collins) and Tars Tarkas (Willem Defoe), Carter takes it upon himself to bring the planet back from the brink of collapse and save its people.

Based on the classic Barsoom novels by Edgar Rice Burroughs, this marks the live-action debut from director Andrew Stanton (Finding Nemo, WALL-E).

Stanton has been given the resources to create an expansive, expensive world, but lacks the instincts to direct live-action, a limitation that shows most in the performances.

Big on ambition and disappointingly short on action.

"Mash-up" doesn't begin to capture this hectic hybrid; it's more like a paintball fight. Messy and chaotic, in other words, but also colorful and kind of fun.

Does John Carter get the job done for the weekend action audience? Yes, I suppose it does. The massive city on legs that stomps across the landscape is well-done. The Tharks are ingenious, although I'm not sure why they need tusks. Lynn Collins makes a terrific heroine.

Andrew Stanton's Disney extravaganza is a rather charming pastiche.

Stanton has built a fantastic world, but the action is unmemorable. Still, just about every sci-fi/fantasy/superhero adventure you ever loved is in here somewhere.

Rather than trying to overwhelm viewers by overloading the senses, John Carter's effects strive to create something new using as their foundation a book that's fired imaginations for the past century.