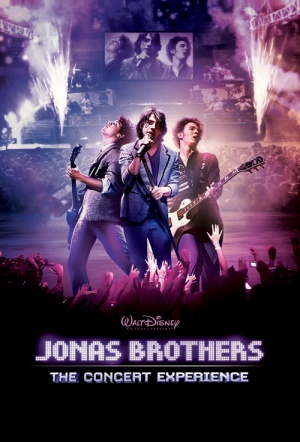 Squeeeeeal! Shrieeeeek! Woooooop! Squeeeek! Faint. Those tween hysteria-inducing pop rocking siblings are hitting the big screen – and indeed busting out of it – with the follow up to last year’s Disney Channel hit Camp Rock. Filmed on last year’s Burning Up tour, this is a mix of 3D concert footage and documentary material on Joe, Nick and Kevin Jonas, the clean-cut boys so beloved of the Obama daughters. Guest appearances include Demi Lovato and Taylor Swift. The film is directed by Bruce Hendricks, who made the Miley Cyrus 3D concert film.

At 76 minutes, the film is nearly twice as long as even the band's most dedicated admirers might need, with weariness setting in around the 40-minute mark.

Isn't a movie so much as a devotional object, a kind of secular fetish designed to induce rapture.

Judging by the audience who filled my screening, it delivers everything a future Mrs Jonas could desire (with a healthy dose of promise rings and uplifting morality).

Certainly their musicianship and onstage professionalism are smooth, though maybe a bit too smooth. There is little spontaneity in anything they do.