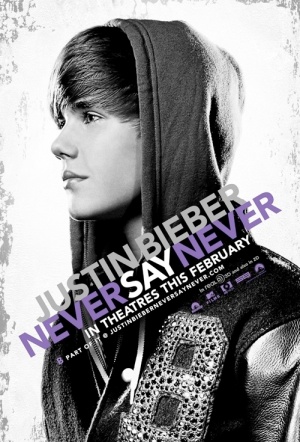 Documentary on pint-sized teen singing-sensation Justin Bieber – exploring the origins of his success, encompassing the years 1994-2010. Justin is joined by Miley Cyrus, Usher and members of Boyz II Men in a selection of behind the scenes and concert footage.

"I want to let people know there's a lot of people that are discouraging in life, [who] will tell you you can't do something, but you just got to remember that the sky's the limit," Justin told MTV News.

As much a legitimate documentary as it is a 3D concert film and teen girl squeal-delivery device, the film possesses surprising moments of candor on the toil of teenage superstardom.

Unlike the Jonas Bros, at least there’s only one of him...

Everyone involved in "Never Say Never" is working overtime to prove that he is, as one of them puts it, "just a regular kid who had a dream," while everything about the movie screams the opposite.

It generally succeeds, too, thanks to a visually energetic approach by director Jon Chu that keeps all the obligatory backstage/onstage bits moving fluidly.

Squeaky clean fun for the youngsters in the family. Everyone else hide.