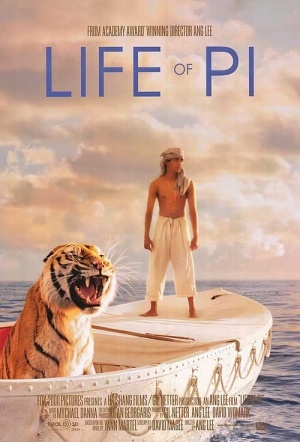 Winner of four Academy Awards, Ang Lee (who picked up a directing Oscar for his efforts) adapts Yann Martel's best-selling novel, the fantastical journey of a young boy adrift in the Pacific Ocean after a shipwreck. On a lifeboat he is accompanied by a hyena, zebra, orangutan and 450-pound tiger.

Pi (newcomer Suraj Sharma) is the precocious, spiritually-inclined son of a zookeeper from Pondicherry, India. On route to a new life in Canada with his family and a selection of zoo animals, the freighter they hitch a ride on sinks. Pi finds himself fighting for survival on a 26-foot lifeboat along with his beastly companions.

High-profile filmmakers have been attached to the project since 2003 - M. Night Shyamalan, Alfonso Cuarón and Jean-Pierre Jeunet versions all fell through.

Radiates spirituality. But it's also a simple, thrilling and gently uplifting tale of a boy, a boat and a tiger.

It may cause you to doubt what you see with your own eyes - or even to wonder if, in the end, you have seen anything at all.

Hollywood has been waiting for this movie.

A miraculous achievement of storytelling and a landmark of visual mastery.

Lee's most provocative work... it's as if the filmmaker has found the philosopher's stone.

There's less than meets the eye.

A gorgeous and accomplished rendering of the massive best-seller.

Beautiful, wise and, at times, miraculous.

It's more compelling to focus on Lee's visceral cinematic experience than on the larger, fuzzier messages.