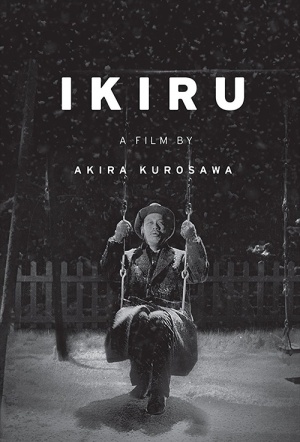 A middle-aged bureaucrat with terminal cancer determines to do something useful with the remainder of his life in this Kurosawa classic.

"It’s the story of office worker Kenji Watanabe, superbly played by Takashi Shimura, an actor in almost every Kurosawa film who rarely played a leading role. This 'ordinary’ bureaucrat, in late middle age, is diagnosed with terminal cancer, and the news leads him to re-assess his life, and his determination to achieve something worthwhile before he dies. Living is one of Kurosawa’s most humanistic films, but also one of his most ironic, which the later sequences indicate." (David Stratton, Sydney Film Festival)

Often heavy-handed but never less than heartfelt, Ikiru (To Live) is universal in its thrust and startlingly astute in its narrative engineering.

Kurosawa performs a tour-de-force in keeping a dramatic thread throughout and avoiding the mawkish.

Kurosawa's eclectic style is a delight: his striking, varied compositions reflecting the old man's journey from darkness to some kind of light right until the moving finale.

Kurosawa achieves the piercing emotion and poetry of the Italian neorealists, but by opposite means: he doesn't make the camera disappear; instead... he deploys his camera so sharply and unerringly that it seems to take X-rays of the spirit.

It is a strangely fascinating and affecting film, up to a point.

I think this is one of the few movies that might actually be able to inspire someone to lead their life a little differently.