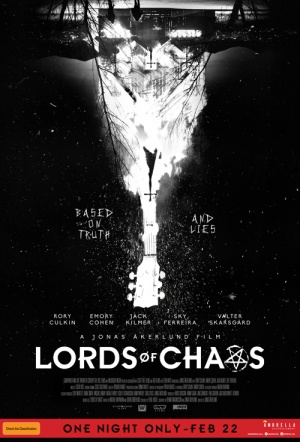 "Based on an astonishingly true story, Lords of Chaos recounts the exploits of the Norwegian black metal movement’s most notorious band: Mayhem. Its founder, Øystein Aarseth, better known as Euronymous, was one of the originators of the annihilating metal guitar sound that burst onto the scene in the early ’90s. After the gruesome suicide of vocalist Per Yngve Ohlin, who performed under the pseudonym “Dead,” Euronymous used the opportunity to inject a mix of satanism, havoc, and murder into the music to sell more records. Bassist Varg Vikernes began to take Euronymous’s headline-grabbing talk too seriously and went on a spree of church burnings, forming a deadly rivalry between the two bandmates that culminated in an infamous and bloody end." (Sundance Film Festival)

Lords of Chaos is a big screen adaptation of the controversial non-fiction book of the same name, revolving around members of the black metal band Mayhem. It is about damaged outcasts doing ugly things.

Akerlund, a veteran music-video director who intersperses "Lords of Chaos" with mildly surrealistic bursts, never establishes a coherent or interesting point of view.

Despite the film's inherent shock value, Lords Of Chaos still manages to successfully mine the explosive psychology of adolescent angst - even if the horror movie aesthetics occasionally threatens to overwhelm proceedings.

"Lords of Chaos" is two hours of boys behaving badly, but somehow forgets that the devil is in the details.

Lords of Chaos provokes both awe and repulsion, but not necessarily admiration for a musical form and subculture unwaveringly devoted to literalism, no matter how extreme.