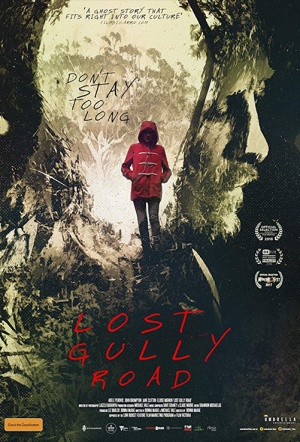 A young woman takes a hiatus from society and retreats into a house in the wilderness, only for things to turn sinister in this psychological horror from filmmaker Donna McRae (Johnny Ghost).

Social media is hell for everyone, but in Lost Gully Road, Lucy (Adele Perovic) discovers the hard way that it can be a case of life and death. Forced to get out of town – fast – her concerned sister Cassie (Eloise Mignon) finds her temporary accommodation in a region of Australia’s lush yet isolated rainforest. Physically and psychologically immobilised by fear and wrestling with extreme boredom on top of it, Lucy’s already tenuous mental health begins to crumble as we ask if her unseen visitor is a figment of her imagination or a very real threat to her safety.

Films don’t get more independent than this slice of gothic mystery, the sophomore feature from director and co-writer Donna McRae. A step up from her 2011 debut – the black-and-white student film curiosity Johnny Ghost, which won her awards at both Melbourne and Berlin underground film festivals – Lost Gully Road is a suspenseful yet low-key tale of the (potential) supernatural. It is very of the moment and yet fiercely unclassifiable.

A slow burn Australian horror film that exposes the danger lurking inside the idea of a supposedly safe domestic space.

A slow burner of a tale that doesn’t feel rushed to get to where it’s going.