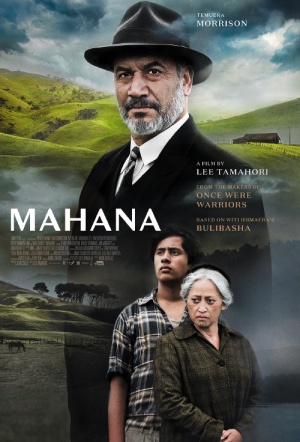 Lee Tamahori (Once Were Warriors) adapts the Witi Ihimaera novel Bulibasha, the story of a rivalry between two sheep-shearing families set on New Zealand's East Coast in the 1960s. Stars Temuera Morrison.

14-year-old Simeon Mahana (Akuhata Keefe), the youngest son of the youngest son, is in conflict with his traditionalist grandfather, Tamihana (Temuera Morrison). As Simeon unravels the truth behind the longstanding family vendetta he risks not just his own future prospects but the cohesion of the entire tight-knit society.

Screenwriter John Collee adapted the book to film, who is best known for writing the 2003 Oscar-winning feature Master and Commander: The Far Side of the World.

It’s not often I’ve seen a preview audience bursting into spontaneous applause after a viewing, but as the credits rolled on Lee Tamahori’s deft retelling of Bulibasha by Witi Ihimaera, it was inevitable, possibly because we had barely wiped the tears from our eyes at the time.

Mahana is a touch simplistic and very romantic. But it does what it does with skill.

Any lack of narrative surprise is more than offset by the beautifully lit photography and gentle soundtrack which charmingly evokes the era.

This 1960s-set soap opera is filtered through sun-dappled nostalgia; there's so much soft focus that you start to wonder if there is something wrong with your eyes.

Tamahori deploys the action-movie skill he's developed in the US, without ever losing the feel of his homeland.

The Patriarch aims for classical screen storytelling, but the result, while entertaining for a time, becomes clunky and predictable, its sentimentality amplified by awkward incorporation of songs into the lush score.