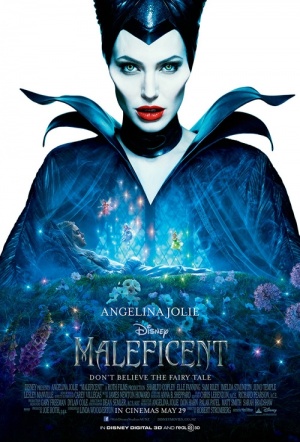 Angelina Jolie is the villainous Maleficent in this dark retelling of Walt Disney's Sleeping Beauty. Follows the fairytale from the witch's perspective - the events that hardened her heart and drove her to curse young Princess Aurora (Elle Fanning) - the living subject of the Maleficent's hatred.

A beautiful, pure-hearted woman, Maleficent has an idyllic life growing up in a peaceable forest kingdom, until one day when an invading army threatens the harmony of the land. Maleficent rises to be the land's fiercest protector, but she ultimately suffers a ruthless betrayal. Bent on revenge, she faces an epic battle with the invading king's successor and, as a result, places a curse upon his newborn infant Aurora. As the child grows, Maleficent realises that Aurora holds the key to peace in the kingdom...

The character of Maleficent is a Disney creation, who appeared in Sleeping Beauty (1959), the animator's version of the Grimm Brothers' wicked fairy godmother. This movie marks the feature directorial debut of Oscar-winning visual effects designer Robert Stromberg (Avatar, Alice in Wonderland).

Uncertain of tone, and bearing visible scarring from what one imagines were multiple rewrites... but it sure is nice to look at for 97 minutes.

Magical but modern, family-friendly but feisty and a feast for the eyes. Maleficent doesn't entirely reinvent the (spindle) wheel, but certainly provoke thought with its (ahem) prick teasing.

If you go into Maleficent expecting Jolie to be the badass of Sleeping Beauty, you’re going to get burned.

At least nobody here is warbling about what she wants before hitting the road to self-actualization.

With a dynamic blend of live action and effects, this is a dark, dazzling and psychologically nuanced fairy-tale reinvention.

If this tiresome yarn is the 'true' story of one of Disney's most popular villains then, please, give us colourful lies and happy ignorance.