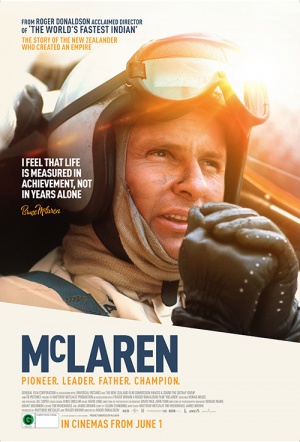 Documentary telling the story of Bruce McLaren, the Kiwi founder of the McLaren Motor Racing team. From the director of The World's Fastest Indian.

Director Roger Donaldson comments, "I was delighted to be involved in the telling of such an incredible New Zealand story - bringing it to life on the big screen has been a huge effort from all involved in Bruce’s legacy. I look forward to the people of New Zealand seeing this inspiring story in cinemas across New Zealand this winter. Ever since seeing Bruce McLaren and Jack Brabham race each other in the Tasman series years ago I've been a McLaren fan. Few people know just how extraordinary his journey was and how much he accomplished in his short life."

From the wreckers yard of Smash Palace and, more recently, Anthony Hopkins traveling all the way from Invercargill with his “motorsickle”, automotive iconography has popped up frequently in the films of Roger Donaldson. I’ll even lump in Kevin Costner rolling over the bonnet of a moving car in No Way Out, a risky use of his lead that apparently didn’t endear Donaldson to studio execs, but epitomises a “roll up your sleeves and just bloody get on with it” attitude shared by both the New Zealand film industry and motorsport legend Bruce McLaren, the subject of Donaldson’s first documentary feature.

Donaldson does a fine job of celebrating his subject's many achievements. Yet compared to, say, Ayrton Senna, McLaren himself doesn't cut a compelling figure.

The talking heads are framed by captions that at times make the film look like a classy PowerPoint presentation, but its mix of lovely, fuzzy archive footage and pretty reconstructions makes it feel like a kind of docufiction.

New Zealand's own 'When We Were Kings'. (Four and a half stars).

It's all very interesting, and at times we are moved by the drama of a key race or the tragic loss of a racing colleague. But it's no Senna, a biopic it will inevitably be compared to by dint of its F1 connections and inherent tragedy. (Three and a half stars).

A solid tale of the Kiwi mentality and pluck behind the wheel that gives voice to one of our heroes.

There won't be a dry eye in the house, McLaren is a wonderful watch, a must-see for all New Zealanders regardless of how much petrol runs through their veins. (Four and a half stars).

For racing fans, McLaren is a no-brainer.

An earnest but one-note portrait of a racing legend that never quite gets up to speed.