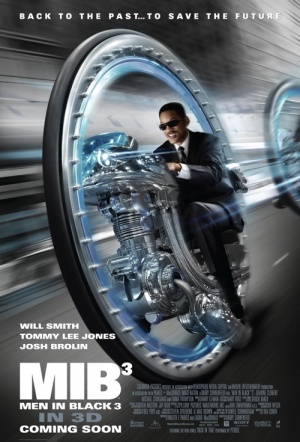 When K suddenly disappears, J is informed his partner has been dead for over 20 years. This perplexing paradox isn't just a threat to the missing MiB veteran, but also to humankind. Agent J jumps back in time (literally) and partners up with the younger Agent K (Brolin) to set matters straight.

Despite such ubiquitous timidity, one can pluck out a few pleasing distractions here.

In this age of blockbuster bloat, Sonnenfeld's willingness to wrap things up well before the two-hour mark, as well as his eschewal of sledgehammer product placement, count as gestures of considerable mercy.

In a summer hardly starved of comic-book properties, this redundant extension of a series that ran out of gas a decade ago doesn't need a neuralyzer to be forgettable.

You do sense, though, that the people behind MIB3 (mainly veteran producer Walter F. Parkes and script doctor David Koepp) were smart enough to let the audience grow up a bit, enough to get the Andy Warhol jokes and one brilliantly weird creation, a delicate alien who can see every outcome at once.

Easily erases the second installment's vague but unpleasant memory and -- though we might hope producers will quit while they're ahead -- paves the way for future installments.

Despite some good moments, Agents J, O and K are missing an E.

Between Smith, Brolin and Stuhlbarg, the film manages to get past its ramshackle story and sometimes surprisingly-shoddy CGI