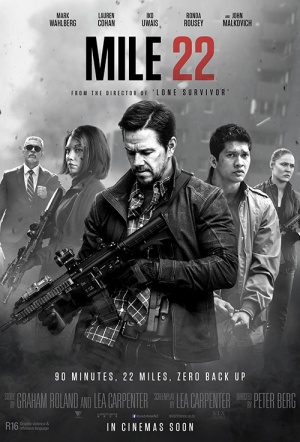 A CIA field officer (Wahlberg) and an Indonesian police officer (Uwais) are forced to work together in confronting political corruption. An informant must be moved twenty-two miles to safety.

Peter Berg's enthusiastic embrace of being Michael Bay-lite continues full steam ahead. Here, he's taken a fantastic plot set-up for an action flick, a few brilliant players, a hard R rating and squandered it all on a frustrating mess of a film.

Seven years after The Raid confirmed Iko Uwais as an action force to be reckoned with, the Indonesian talent should be a huge star. The 2014 sequel to his breakout hit might’ve solidified his on-screen credentials, but elsewhere he has been sorely squandered – in a small part in the Keanu Reeves-written and directed Man of Tai Chi, in a blink-and-you’ll-miss-it appearance in Star Wars: Episode VII – The Force Awakens and in sci-fi sequel Beyond Skyline.

It's a spiky propulsive thriller, at once exciting and numbing, packed with weaponry - rocket launchers and chunky black machine guns - as well as hand-to-hand combat that's marked by its quick-time viciousness.

The two times Uwais is allowed to bust out his fighting moves, the scenes are Cuisinarted into incomprehensible shreds, and the point becomes not the precision and virtuosity of his skills, but the broken bones and spurting gore that end each mano-a-mano.

"Mile 22" makes for an appalling referendum on the state of commercial cinema in 2018.

Mile 22 is an over-stated and predictable film. But as a showcase for some serviceable camerawork, bravura editing and occasionally brilliantly inventive fight choreography, it ticks the boxes. Bravo.

Mile 22 can give you chase scenes and bullet-ridden shoot-outs and evil Russians and lengthy diatribes. What it can't give you is a watchable action movie.

There's not an ounce of flab here, nothing inessential to the urgent goal of getting the key characters where they're going before the clock expires.

...wince-inducing in the extreme...

A deeply nihilistic and grotesque experience.