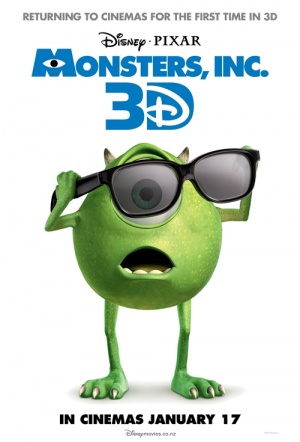 3D re-release of Disney/Pixar’s 2001 monstrous hit, following the exploits of pals Sully (voiced by John Goodman), a loveable big blue behemoth, and Mike (Billy Crystal), a short wisecracking cyclops. Together, they are an extremely competent duo, safely extracting scares from contaminated human children - the screams are then used as an energy source to power the city of Monstropolis. However, when a curious 2-year-old nicknamed Boo stumbles into the monster's world, Sully and Mike must rush her back home before their boss Mr. Waternoose (James Coburn) or rival scarer Randell (Steve Buscemi) find out.

The excellent basic ideas have yielded too few twists and dramatic junctures to keep the picture flying at the level at which it starts.

A sparkling cartoon, peppered with gags, slapstick and action.

It's about scream deficit, yet all great cartoons are powered by screams. It's a tribute to noise, so how can you not fall in love with it?

Staggeringly generous with its witty lines, its allusions, above all with its sheer visual spectacle.

Cheerful, high-energy fun, and like the other Pixar movies, has a running supply of gags and references aimed at grownups.

Has its charms but can't match its predecessors' sophistication.

A witty, uncommonly intelligent and savvy journey into the world of childhood nightmares.

Another chance to see Pixar's most dazzling premise, now spruced up with a third dimension.