"Monsters University" proves a solid achievement while we wait for Pixars triumphant return.

It's tough to say if Pixar will ever return to the astonishing heights of their hay-day (If you count pretty much everything pre-Toy Story 3, excluding Cars). Since then they have churned out an unbelievably mediocre sequel, a well-designed, but bland original piece and I honestly felt I could be disappointed with this prequel to a wonderful film. I'm glad to say I was wrong, for the most part about Monsters University.

Monsters University takes us back to the very beginning with Mike and Sulley's insertion into university. Were they the best of friends then? It's good to see that the Pixar team has tackled the story a little differently than you might expect. It opens up the possibilities for more exploration of character and truth be told, it only really finds that place during the final 20 minutes. What comes prior appears to boardline a Disney film in its cute factor and fluffy antics and the charm might not be as strong as Monsters Inc, but I felt enough laughs and wit squeezing through for to me feel welcomed back to the world.

Monsters University proves a solid achievement that appeals strongly to the kids and has enough laughs and the odd thoughtful message for us adults. It shows that Pixar haven't continued down the hole that they fell into recently, but I wonder if they will ever scale their unbelievable heights again. I can continue to hope. 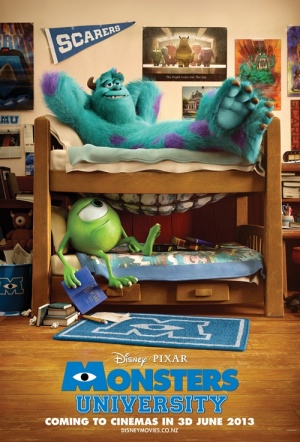