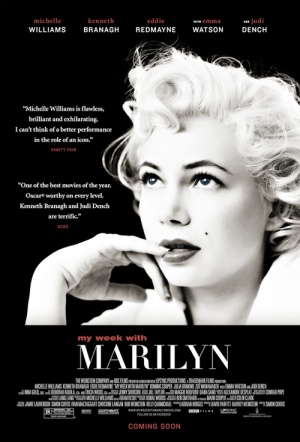 Michelle Williams (in a Golden Globe winning performance) is Marilyn Monroe in this drama based on the memoirs of Colin Clark and his alleged affair with the film icon. Also stars Kenneth Branagh, Emma Watson and Judi Dench.

In England to film The Prince and the Showgirl (1956) with Sir Laurence Olivier (Branagh), the time away from Hollywood also doubles as Monroe’s honeymoon with her new husband, playwright great Arthur Miller (Dougray Scott). Working on the movie is Colin Clark (Eddie Redmayne), a lowly 23-year-old assistant to whom Monroe takes a shine.

Based on Clark’s two books (a set of diaries and a memoir) written many years later, My Week with Marilyn focuses on an idyllic week when Clark showed Monroe – desperate to get away from the pressures of stardom – the pleasures of the English countryside.

My Week with Marilyn / Reviews

To the extent that Michelle Williams' multilayered interpretation of Marilyn Monroe serves as its raison d'etre, My Week With Marilyn succeeds stunningly.

More an awestruck reverie than a revelatory biopic, it's worth seeing for Williams' bravura performance.

A treat for film buffs that’s sure to be a heavy-hitter this awards season, Marilyn could end up earning its subject the Oscar she never won during her too-short life.

Offers a great deal of pleasure and fun.

A slyly comic meditation on stardom.

What matters is the performance by Michelle Williams. She evokes so many Marilyns, public and private, real and make-believe.We didn't know Monroe, but we believe she must have been something like this.

Williams gets us on intimate terms with one of Hollywood's most enduring and tragic icons.