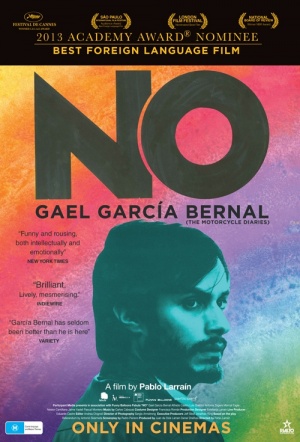 Political drama based on a true story, set at the time of Chile's 1988 referendum to unseat military dictator Augusto Pinochet. Gael García Bernal (The Science of Sleep) stars as an ad executive planning the advertising campaign to win the vote and oust Pinochet.

Due to international pressure, Pinochet is forced to call a plebiscite on his presidency. The country will vote YES or NO to extending his rule for another eight years. Opposition leaders for the NO campaign persuade a brash young advertising executive, Rene Saavedra (Bernal), to spearhead their campaign. Against all odds, with scant resources and under scrutiny by the despot's minions, Saavedra and his team devise an audacious plan to win the election and set Chile free.

Tense throughout, even for history-savvy auds, but still rich in the sort of Andean-soil-black humor that made Larrain's previous work so distinctive.

“We have to find a product that’s appealing to people!” says Garcia Bernal at one point. And that’s just what Larraín’s created with this Latin spin on "Mad Men."

The essential thrust here is both knowing and undeniable: No is pitched at the pivot point when the image makers were brazen enough to push ideology to the side. Considering how high the stakes were, it’s amazing they almost didn’t get the gig.

The film becomes a sort of boxing match, getting more intense with each round, building to an exciting finish.

Initially jarring, the video aesthetic blends beautifully with period footage to give a smart depiction of a nation in transition. A well-deserved Oscar nominee.

No is a comedy, but of a dangerous sort. Its eyes are open and the laughs tend to stick in your throat.

The most unexpectedly riotous comedy in years -- one with more bite than usual.