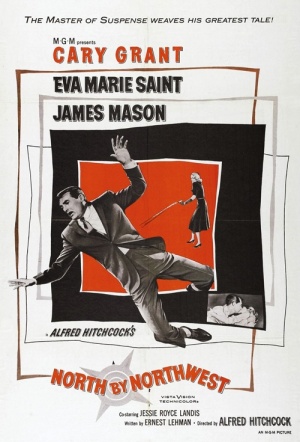 The Alfred Hitchcock mistaken-identity suspense classic featuring two of the most memorable moments in cinema: Cary Grant being chased by an airplane in open fields, and the climatic fight atop Mount Rushmore.

"Cary Grant plays a Manhattan advertising executive who's mistaken for a government agent. His attempts to clear up the misunderstanding only implicate him in a murder that makes him the target in a nationwide hunt. Forced on the run, he's faced at every turn by assassins out to kill him, and the mysterious Eva Marie Saint who's only too keen to help." (BBC)

The Alfred Hitchcock mixture as before--suspense, intrigue. comedy, humor. Seldom has the concoction been served up so delectably...

The movie was born from two key scenes that Hitchcock was desperate to realise. One was to be set at the United Nations, and the other was to be a chase across the presidential faces carved into the Mount Rushmore National Monument. It was Lehman's job to construct a film around these two visions, and out of them emerges a thriller so improbable that it becomes quite brilliant in evading even the most fantastic of audience guesses...