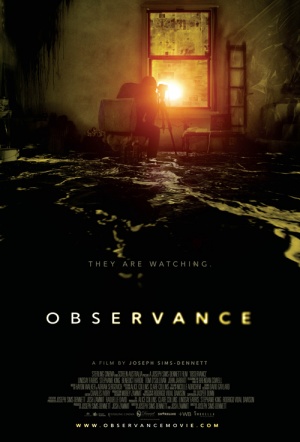 "Reeling from the recent death of his young son and subsequent disintegration of his marriage, Parker attempts to get his life on track, accepting a surveillance job that sees him take residence in a run-down apartment. With instructions only to spy on a woman living opposite, but without any real sense of why, Parker begins to fear for her safety. Meanwhile, his health appears to be taking a gradual turn for the worse. And just what is that jar of black ooze that seems to be growing in the corner of the room?

"Trading in questions rather than answers, Joseph Sims-Dennett’s head-scratcher defies easy categorisation, resulting in an experience that can be both exhilarating and exasperating at the same time. Try picturing David Cronenberg remaking Rear Window by way of Shane Carruth, and you might get some sense of what is going on here – but not quite. In fact, you might not ever really know." (London Film Festival)