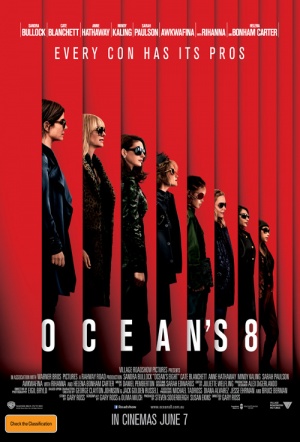 Never capturing the sleek cool of the original trilogy, Ocean’s Eight is a dull film rescued by an ensemble of excellent women. The film opens with Debbie Ocean (Sandra Bullock), the younger sister of George Clooney’s Danny from the original trilogy, newly released from five years in prison, conning her way into a new wardrobe from Bergdorf’s and a room at a luxury hotel. The confidence and elegance with which she pulls off these low-level scams is a thrill to watch and sets an electric anticipation of what’s to come. However, this anticipation is never quite lived up to.

"Ocean's 8" is a casually winning heist movie, no more and no less, but like countless films devoted to the exploits of cool male criminals, it lingers most...as a proudly scurrilous gallery of role models.

Resisting its mischievous spirit is simply impossible. How often is a group of skilled women allowed to be bad?

A lot of this is fun to watch but would have been more breezily enjoyable if the movie played as lightly (and seriously) with gender as much as it does with genre.

It's made watchable thanks to the cast but star power alone cannot mask creative inadequacy. Stealing a diamond necklace is bad but wasting an opportunity like this is unforgivable.

The choreography of the scam is almost upstaged by the gang's costume changes. They're spectacular.

There are some moments of clever misdirection, last-minute hitches and double-crossing, no little art amongst the cinematography and editing and a terrific performance from Hathaway.

Entirely enjoyable and worthy, but one can't help but wonder what a stronger vision behind the camera may have produced.

It's savvy enough to recognise that politics and pulchritude make excellent bedfellows.

There's...something dispiritingly mechanical about the movie that makes it seem a missed opportunity.

It lacks the jazzy swagger of Soderbergh's trio but delivers a fun, likeable romp built on the charm and charisma of its cast.