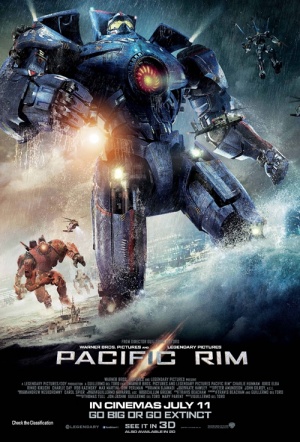 Epic sci-fi actioner from Guillermo del Toro (Pan's Labyrinth) centering on a battle for Earth between massive monsters that arise from the Pacific Ocean and human-manned robots, created to defeat them. Stars Idris Elba and Charlie Day.

When legions of monstrous creatures, known as Kaiju, rose from the sea, a war began that would take millions of lives. To combat the giant Kaiju, a special type of weapon was devised: huge, manned robots, called Jaegers. On the verge of defeat, the forces protecting mankind turn to two unlikely heroes - a washed up former pilot (Charlie Hunnam) and an untested trainee (Rinko Kikuchi) - who are teamed to drive a legendary but seemingly obsolete Jaeger from the past. The pair are the world's last hope against the mounting apocalypse.

Del Toro promised at Comic-Con 2011 that the film will feature “the finest f**king monsters ever committed to screen.”

A huge, CGI-heavy popcorner that still feels personal. Come for the epic monster-on-mecha showdowns, stay for the likeable humans.

The warmth and idiosyncracy that characterises Del Toro’s finest work, from ‘Pan’s Labyrinth’ to ‘Hellboy 2’, is absent.

Pacific Rim's wafer-thin psychodrama and plot-generator dialogue provides little for the human component to get their teeth into.

Del Toro is giving scope to a boyhood lust for mayhem, the multi-million-dollar equivalent of kicking over sandcastles and torturing insects. There is something infectiously juvenile in that.