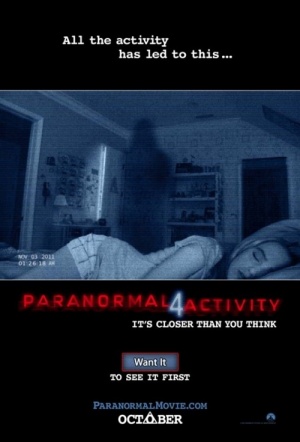 The Paranormal Activity series returns to a contemporary setting and another house of unwitting victims who go about documenting creepy goings-on. This time it's a teenage girl and her Skype boy pal who are convinced strange things are happening involving her younger brother and his odd new friend.

The directors of Catfish and Paranormal Activity 3 return with this fourth instalment to the horror found-footage franchise which picks up five years after PA2. Teenager Alex (Kathryn Newton) and her boyfriend Ben (Matt Shively) keep in touch with their phones and over Skype, both devices document the occult events that start when Katie (Katie Featherston from the other PA films) and her little boy move in across the street. Soon Alex's house is rigged with hidden cameras and an X-Box Kinect that combine to capture another batch of increasingly paranormal activity.

Less reliant on slow-burn suspense and larded with fake-out jump scares, this is the first sequel in the series that fails to advance the overall mythology in any meaningful way.

Aside from the usual self-slamming doors and flying bodies, there are enough creepy kids and hiding knives to distract from a plot that’s increasingly mobile yet running on the spot.

This film's strong suit is that it finally feels contemporary.

The film does deliver on scares, and at a time when so few Hollywood horrors succeed on that front, we should [be] grateful for the consistency of the Paranormal Activity films.

This once-innovative series rolls on without much regard for either plot or character development.